“Identity thieves who specialize in tax refund fraud have been busy of late hacking online accounts at multiple tax preparation firms, using them to file phony refund requests. Once the Internal Revenue Service processes the return and deposits money into bank accounts of the hacked firms’ clients, the crooks contact those clients posing as a collection agency and demand that the money be “returned.”

In one version of the scam, criminals are pretending to be debt collection agency officials acting on behalf of the IRS. They’ll call taxpayers who’ve had fraudulent tax refunds deposited into their bank accounts, claim the refund was deposited in error, and threaten recipients with criminal charges if they fail to forward the money to the collection agency.

This is exactly what happened to a number of customers at a half dozen banks in Oklahoma earlier this month. Elaine Dodd, executive vice president of the fraud division at the Oklahoma Bankers Association, said many financial institutions in the Oklahoma City area had “a good number of customers” who had large sums deposited into their bank accounts at the same time.

Dodd said the bank customers received hefty deposits into their accounts from the U.S. Treasury, and shortly thereafter were contacted by phone by someone claiming to be a collections agent for a firm calling itself DebtCredit and using the Web site name debtcredit[dot]us.

“We’re having customers getting refunds they have not applied for,” Dodd said, noting that the transfers were traced back to a local tax preparer who’d apparently gotten phished or hacked. Those banks are now working with affected customers to close the accounts and open new ones, Dodd said. “If the crooks have breached a tax preparer and can send money to the client, they can sure enough pull money out of those accounts, too.” 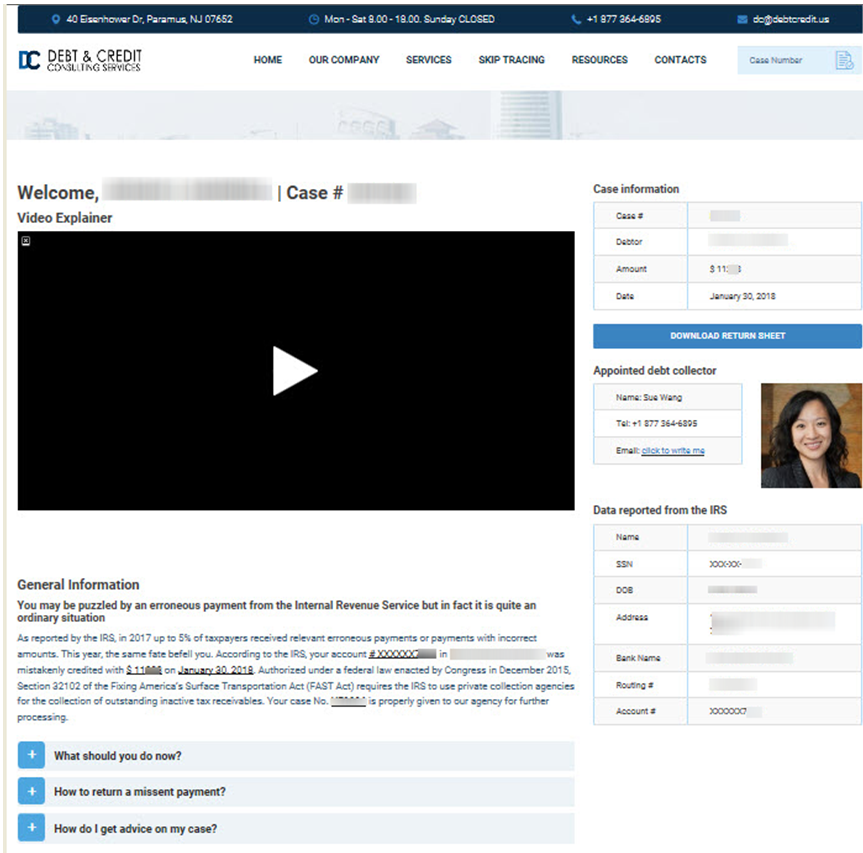 Several of the Oklahoma bank’s clients received customized notices from a phony company claiming to be a collections agency hired by the IRS.

The domain debtcredit[dot]us hasn’t been active for some time, but an exact copy of the site to which the bank’s clients were referred by the phony collection agency can be found at jcdebt[dot]com — a domain that was registered less than a month ago. The site purports to be associated with a company in New Jersey called Debt & Credit Consulting Services, but according to a record (PDF) retrieved from the New Jersey Secretary of State’s office, that company’s business license was revoked in 2010.

“You may be puzzled by an erroneous payment from the Internal Revenue Service but in fact it is quite an ordinary situation,” reads the HTML page shared with people who received the fraudulent IRS refunds. It includes a video explaining the matter, and references a case number, the amount and date of the transaction, and provides a list of personal “data reported by the IRS,” including the recipient’s name, Social Security Number (SSN), address, bank name, bank routing number and account number.

All of these details no doubt are included to make the scheme look official; most recipients will never suspect that they received the bank transfer because their accounting firm got hacked.

The scammers even supposedly assign the recipients an individual “appointed debt collector,” complete with a picture of the employee, her name, telephone number and email address. However, the emails to the domain used in the email address from the screenshot above (debtcredit[dot]com) bounced, and no one answers at the provided telephone number.

Along with the Web page listing the recipient’s personal and bank account information, each recipient is given a “transaction error correction letter” with IRS letterhead (see image below) that includes many of the same personal and financial details on the HTML page. It also gives the recipient instructions on the account number, ACH routing and wire number to which the wayward funds are to be wired. 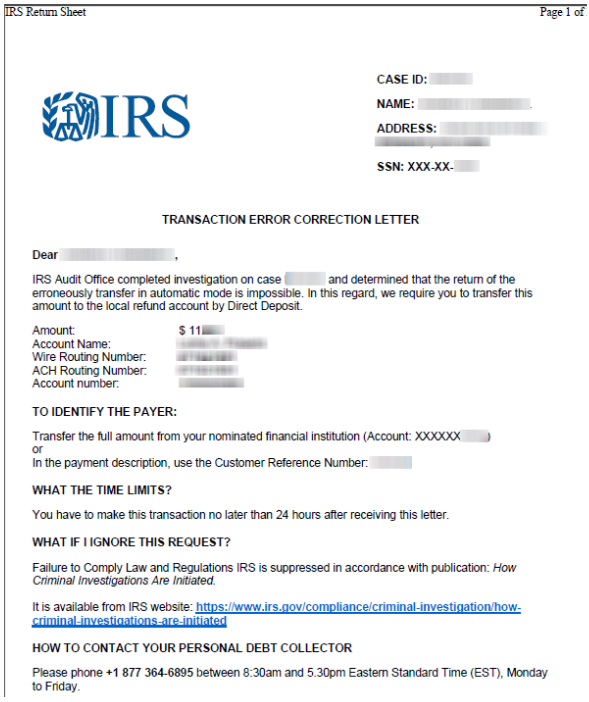 A phony letter from the IRS instructing recipients on how and where to wire the money that was deposited into their bank account as a result of a fraudulent tax refund request filed in their name.

Tax refund fraud affects hundreds of thousands, if not millions, of U.S. citizens annually. Victims usually first learn of the crime after having their returns rejected because scammers beat them to it. Even those who are not required to file a return can be victims of refund fraud, as can those who are not actually due a refund from the IRS.

On Feb. 2, 2018, the IRS issued a warning to tax preparers, urging them to step up their security in light of increased attacks. On Feb. 13, the IRS warned that phony refunds through hacked tax preparation accounts are a “quickly growing scam.”

“Thieves know it is more difficult to identify and halt fraudulent tax returns when they are using real client data such as income, dependents, credits and deductions,” the agency noted in the Feb. 2 alert. “Generally, criminals find alternative ways to get the fraudulent refunds delivered to themselves rather than the real taxpayers.”

The IRS says taxpayer who receive fraudulent transfers from the IRS should contact their financial institution, as the account may need to be closed (because the account details are clearly in the hands of cybercriminals). Taxpayers receiving erroneous refunds also should consider contacting their tax preparers immediately.

If you go to file your taxes electronically this year and the return is rejected, it may mean fraudsters have beat you to it. The IRS advises taxpayers in this situation to follow the steps outlined in the Taxpayer Guide to Identity Theft. Those unable to file electronically should mail a paper tax return along with Form 14039 (PDF) — the Identity Theft Affidavit — stating they were victims of a tax preparer data breach.”